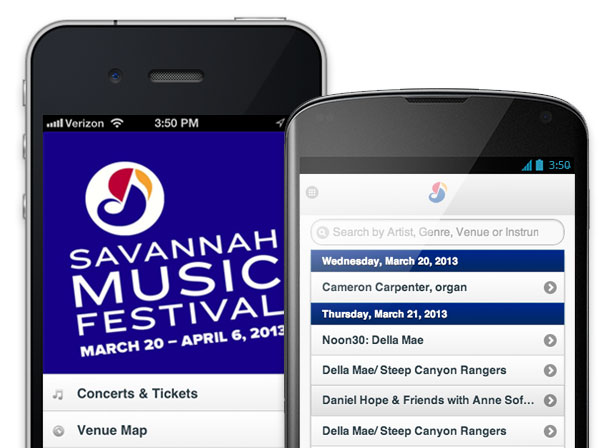 We've been very proud to partner with the Savannah Music Festival over the past few years to bring their website to life. The 2013 season marks the third year of their 5-star rated iPhone app and the debut of their Android app.
The continued evolution of mobile app development finally has us at a place where there is some degree of parity between designing for iOS (iPhone, iPad) and Android (devices from Samsung, Amazon's Kindle and many more). In short, we've been able to leverage much of what we've learned about designing responsive websites and apply it to building dedicated apps. Where many developers see the fragmentation among Android devices as an obstacle, building fluid layouts means that no matter what the device's screen size, aspect ratio or form factor, the app will look great and function the way you want.
That's not to say that there aren't still frustrations with Android at times; but even Apple's devices have started to cause headaches with new aspect ratios in both their iPhone and iPad lines with the introduction of iPhone 5 and iPad Mini. Building these new apps for the Savannah Music Festival has led us to the realization that it's easier than ever to build great looking, uniform apps for the diverse platforms, often using native web functionality and well-tested frameworks.
The new music festival apps include an interactive calendar that can be sorted on the fly by the artist, genre, venue, featured instrument or date. The apps have Facebook integration, so fans can like your page from within the app and view recent wall posts. The apps also feature interactive maps using Apple's own Maps app for iOS and Google Maps for Android. This allows the user to view their current location in addition to find where the shows will be taking place. The apps include music players to download and stream archived concert performances and have an integrated area guide to showcase festival sponsors and local points of interest.
» Download for iPhone, iPod Touch
» Download for Android
Do you need an app for your music festival, art festival or cultural event? If so, let's talk.